Last night we had a group of four. Two of them claimed to be sensitive to ghosts and energies. I love it when clairvoyants join the tour. It makes it so much more exciting.

Here’s a breakdown of interesting things from last night.

I’ll post their pictures here as soon as I get them.

Here’s an email from a guest on the tour. It’s re-posted with permission.

Question, I don’t mean to frighten you in any way but, I’ve noticed you had a strong female presence that clings onto you. It was an older woman and I couldn’t wrap my head on the relation between you two, since she was Korean. However, when I arrived home I was all of a sudden intrigued on the thought of Queen Min. I started to look her up, and as I saw her picture I strongly sensed it was her presence that was around you.

I don’t think she is meant to cause harm in any way, but I strongly believe she appreciates you telling her story as a way of acknowledging her and educating people about her. I do believe that she can be quite possessive of you and please keep in mind she might view your wife as a kind of a threat and may cause pointless arguments so please be aware. (Since you were surrounded with women last night, her presence was strong) I just received the photos. They were mostly around the end of the tour. We get a lot of reports of odd happenings there. On this tour, they said they felt a presence pulling at them. 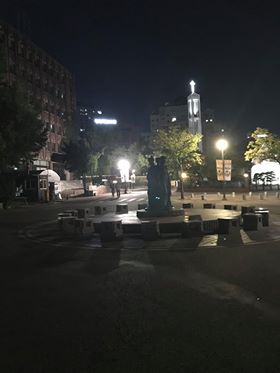 Note the haziness of the lights. No matter what time of year nor the weather, they always glow like this. It’s like you just got out of the swimming pool with chlorine soaked eyes. Those also could be some floating orbs dancing on the grounds. Sign up for The Dark Side of Seoul Ghost Walk. We have a special tour on October 27th, where the REAL LIFE Minji the Korean Ghost will join us in person. That’ll be a fun time.